Earlier I wrote about winning some copper beads from Rings and Things. This was a part of a design challange and as I also worte earlier pictures of my designs have beens added to that blog post as well as the other designers who sent in their designs. Further down in this post you will see what I created. I really love copper an this challande was really fun even though som of the elemets/beads that was a part of the sample pack of brushed finnish solid copper breads we recieved was a bit challangeing. The pack contained large spools, large slightly biconeshaped beads with big holes, large puffy rondelles, square beads, brushed rounds and small corugated rounds, small wavy discs and puffy flower beads. 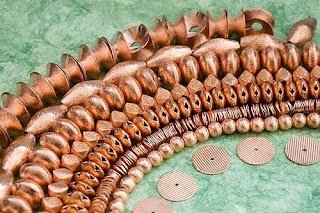 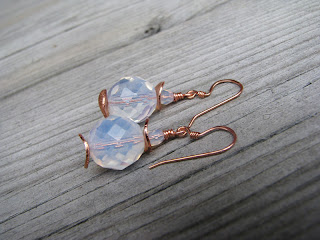 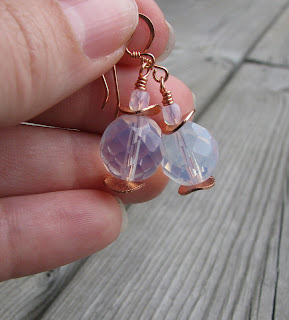 A pair of simple drop earrings with wavy disks and opalite firepolished beads in two sizes. Lovely int the summer since both the copper discs and the beads really sparkle in the sunlight. 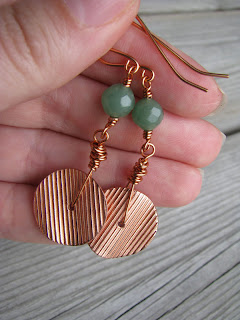 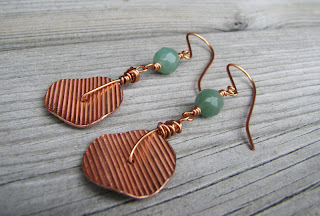 A pair of slightly longer earrings with the large textured discs that I had a bit of a problem with in the beginning, the designs didn't come out the way I wanted them to. In the end I desided to try and alter the discs slightly and made them a bit wavy ant the ended up in this pair of earrings together with some fasetted aventurines and handmade hooks. 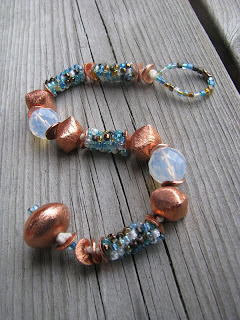 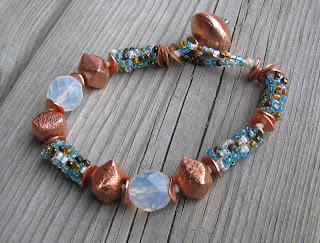 This bracelet is strung on white waxed linnen cord and the clasp is made up by a large puffy ronelle bead in copper and a loop with triangel seed beads from the same mix as the peyote tubes. There is also opalite czech firepolished glass beads and again the small wavy disks and the square copper beads. The beads really glimmer nicely inte sun and together with the turqoise this is a really summery bracelet. 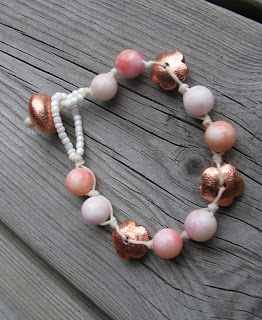 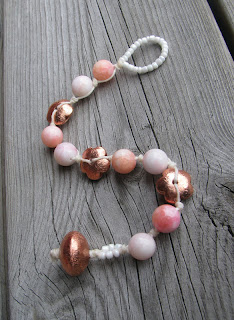 Bracelet number two (yes, I am in a bracelet mood right now!) is also strung on white waxed linnen cord with a puffy rondelle and seed bead loop as clasp. I also strung some candy jade beads and the puffy flowers, again a nice summery bracelet. 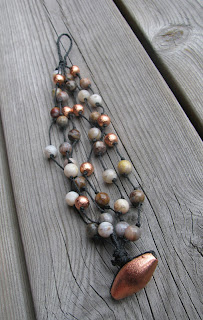 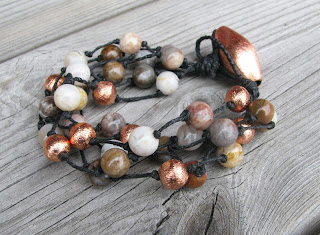 And now to bracelet number three ( :-D ) which is actually the first one of the tree that I made. It is inspired of a favourite bracelet of mine that I made a couple of years ago but I wanted to try out some other way of attaching a clasp and as soon as I sa this bíg oval shaped copper bead I thought of it a s a clasp togher with a braided loop. There are six strands in this bracelet and I have tied the brushed copper beads together with some jasper stone beads. 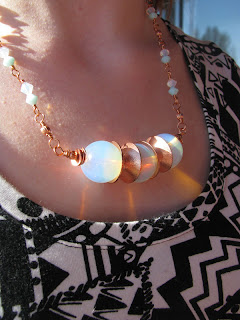 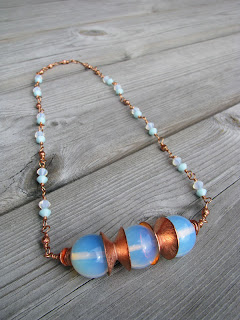 Last but not least, the necklace. The focal part is made of three big (20mm) opalite glass beads are strung on 20 ga copper wire togheter with the brushed copper spools and ended with some wavy disks and small corugated copper beads. To finnsih the necklace I made a wire wrapped chain alternating the corugated beads with sections with 6mm swarovski bicones in opalite and a minty green. I ended with a handmade hook and eye clasp that makes it possible to change the length of the necklace.

This challange was really fun And I really liked the moste of the copper beads. The favourites was the two round beads and the small wavy discs but I also liked the possibilitu to use the bigger beads as clasp.